Stories From the Field

This is Lon Yong, aged 56. She was born to a peasant farmer family in Krakor Village, a village of Dac Siel, a base camp of the Khmer Rouge. One day in 1982, she came to Trapeang Run village to look for mangoes. However, it was a dangerous spot to do so. Unfortunately, the windmill (Mung Kok) near the mango tree trampled her and left her leg paralyzed.
By 1987, she had been living with her first husband in a quiet, secluded village until one day in 1991. A group of Khmer Rouge soldiers asked her for a short stay. When the Khmer Rouge saw that her house had Khmer Rouge troops, they also fired bullets at her home. Her family, innocent people, had to run for their lives. It was the hardest thing they ever had to do. Her ex-husband died. She suffered a broken shoulder, and heart.
Currently, Lon Yong lives in Trapeang Run village, Russey Lok commune, Chi Kraeng district, Siem Reap province with her husband, Khou Kim, and three grandsons. Her house is 1,600m2, and living conditions are poor. Chi Kraeng is made up of 14 villages, and the primary industry for families here is agriculture and local business. It is also a former mine site, which has put her and her family at risk of landmines. In addition, due to poverty, she has been forced to relocate more than once.
On the 10th of August, 2019, EOD Team 5 received two requests from Lon Yong’s village, and found two items. The first was a 70mm Launcher Model.2 B-40. The second was a 85mm Soviet Union rocket, and was deemed unsafe to move. Both items were safely destroyed.
The effects of war in Cambodia have lasted for generations. This woman lived through the war from beginning to end, but her life is still affected by it. Her grandchildren were not alive for the war, but feel the repercussions. They might ask “Why does our land hurt us? Why are loved ones getting harmed?” While we know the answers, it is heartbreaking the questions are still being asked. Cambodia is a battleground that has not been cleared yet. We can only do that with your help. 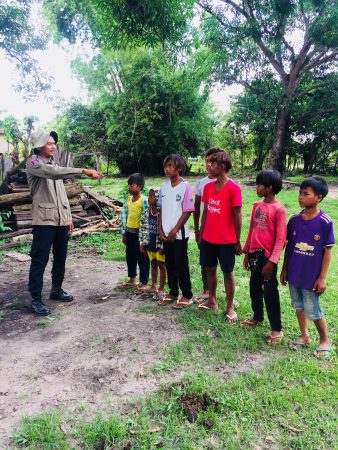 On August 13th, 2019 EOD Teams 3 traveled to Robonh Village, Morokot Commune Choam Ksant District, Preah Vihear Province. This province is to the east of Siem Reap, bordering both Thailand and Laos. It was one of the last areas the Khmer Rouge held power over as the Vietnamese and Cambodians pushed back against them. Feeling the pressure, the Khmer Rouge spread mines and munitions all throughout the land. To retaliate, the Vietnamese and Cambodians did the same. Ever since, even until today, innocent people have and killed and injured by these dangerous remnants of war.
EOD Team 3 had received one request from villagers for help. To get to the village, the team had to travel through some harsh roads and transportation difficulties, due to the lack of infrastructure in the province. This, however, is not uncommon for them.
When they arrived, they found not just the reported UXO, but a second one. This goes to show how prevalent the danger is here, how close it can be and go unseen until it’s too late. The first item was a grenade launcher, the second was a rocket, both of Chinese origin. They were found near the farmland that the villagers work in every day. Both were safe to be moved, but still needed to be destroyed.
The team took the opportunity to give an MRE class to seven young boys who live in the village. The kids spend a lot of time outside on the land, whether working or playing, and need to be aware of the danger. They are taught how to be safe. The most important lesson is DO NOT TOUCH a foreign object. MRE is a pillar of demining because it truly decreases the amount of UXO incidents. It keeps people safer, until we are able to clear the land for good. 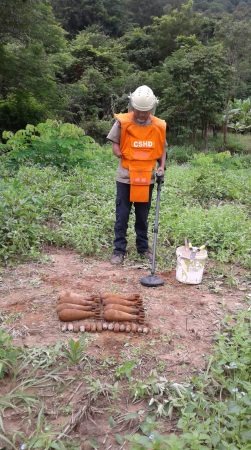 On September 7, 2019, EOD Team 3 responded to a call-out in Trapeang Bei Village, Preah Bralay Commune, Trapeang Brasart District of Oddar Meanchey Province. Oddar Meanchey Province is in the remote northwest of Cambodia, bordering Thailand. It was formerly under French control, returned to Cambodia in 1946. A district in Oddar Meanchey, Anlong Veng is where the Khmer Rouge were based from 1989, and where they made their last stand in 1998. Here you can see Pol Pot’s grave, hidden hideouts of Khmer Rouge leaders, and execution sites. Oddar Meanchey is still very landmine ridden. However, the province is rich in natural resources; residents focus on farming and fishing. Some work in Thailand as factory workers.

The EOD Team had received a call-out request from the police. Villagers often will alert the police when they find something because the police can more easily contact our team. These villagers had found the UXOs on their farmland, their livelihood. They fortunately knew to clear the area and not touch the object. When our team arrived they were shown the location pertaining to the call. They found 12 Chinese 82 mm HE type 30 mortars, sixteen Chinese Fuze MP 6, two Vietnamese 60 mm MBV 78 A1 fragmentation mines, one Soviet 60 mm POMZ2M fragmentation mine, and one Soviet 112mm PMN blast mine. All items were safe to move.

This shows just how many countries have a legacy here in Cambodia.

Fighting in Cambodia began in the 1960s and lasted until the 1990s. Explosive remnants of war (ERW) are left over and can last decades, perhaps centuries. If you go to plow a field, you don’t want to plow up a rocket propelled grenade. They used these to blow up cars and SUVs. Our teams go find what is out there.

On June 5, 2018, EOD Team 2 was in Preah Vihear Province. Sometimes when we get a call-out, the team feels like there is not much around. Many times kids pick up trash. This call could’ve been the 5th or 15th they’d had. When that happens, they break out the

BIG detector. Each of our teams carries with them a “large 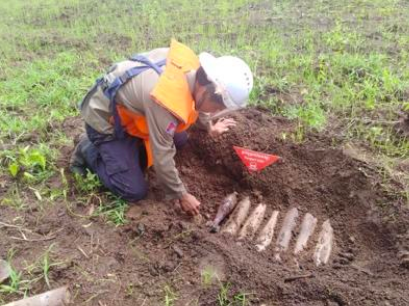 loop” detector. CSHD’s are made by Ebinger in Germany and cost about USD $7,000 each.  They look like PVC piping configured in a rectangle, 2 meters wide and 1 meter deep. Two deminers will talk through a field and it will “deep search” for items left behind and buried for decades. Battle Area Clearance is one term for this work. We just call it “picking up garbage.”

In Preah Vihear, on the 5th of June the team was pretty certain there were more items to be found, and low and behold they found a treasure trove of items. Enough to kill dozens:

All were safe to move. The Team collected them, photographed them, and blew them up. 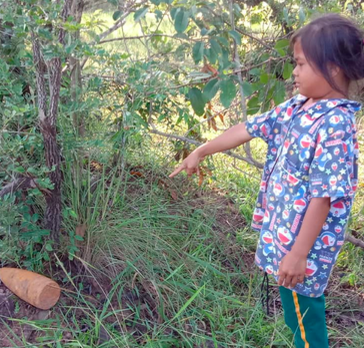 On October 22, 2019, four call-out requests were reported by locals in Thmey Village, Svay Leu Commune, Svay Leu District, Siem Reap Province. All four requests were ERW, none were garbage, which sometimes happens. Even if what the Team finds is scrap metal, we thank the villagers for reporting it. Better safe than sorry.

The items found by EOD Team 5 were:

These ERWs were found in Siem Reap Province, only an hour and a half drive away from the center of Siem Reap City. We don’t say this to scare off tourists; any areas tourists frequent were cleared a long time ago. However, this example demonstrates that landmines and UXOs are an issue still close to home. The family who found this in Svay Leu Commune live so close to a bustling, quickly developing [landmine-free] city center that has everything any tourist could need, yet they are walking around outside their house wondering if it is safe. The juxtaposition is jarring, isn’t it? Some people from this commune might go to Siem Reap city to work, but look at villages further and further away from the main cities and the contrast becomes even stronger.

It is not because these rural areas are forgotten, in fact RSVP specifically focuses on them, but it is because of the sheer amount of landmines and UXOs that are leftover. Furthermore in some areas they may not have mines enough to be considered a “mine field,” which also pushes it to be cleared later on. The spread out nature of the contamination of ERW must be kept in mind. There isn’t always a large amount of explosive near each other. This is what our EOD teams can focus on. One UXO left on the ground is still one life that can be taken.

A Mine with a Nickname 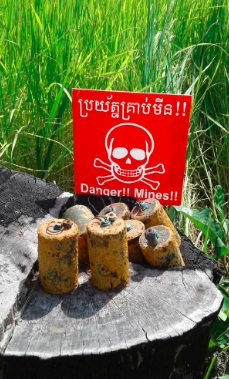 On October 21, 2019 EOD Team 3 received a request from villagers from Tumnub Commune, Trapeang Brasat District, Oddar Meanchey Province. They traveled from Preah Vihear Province, where they had responded to a call the day prior. When the team arrived, they found not one, not two, but SEVEN landmines. All seven were the same make: Bounding Mine 60mm Type 69 from China. Bounding mines, nicknamed “Bouncing Betties,” “Jumping Jacks,” or “frog mines,” are perhaps the most deadly of all anti-personnel landmines. Their notorious nature and unique detonation earned them these nicknames. These mines can be triggered with direct pressure or a trip wire, with just 1.5kg or pressure. When triggered, the mine launches 3-4 feet in the air, around waist height, then the main charge detonates. This is why they are especially dangerous: the chest and abdomen are targets. Metal fragments shoot out in a 360 degree arc, and can kill 35 meters away. The first German version of this mine was used in World War II, and was a significant weapon. It has since been re-made by France, the United States, China, the Soviet Union, Finland, Sweden and Italy.

We do not always find multiple of the same type of mine on one call-out. The most common is finding two of a kind. On this day, these mines were safe to move, so were able to be put together for the picture. Safe to move means our team knows they can safely move it to a better location to destroy. It may seem crazy when they just pick it up and walk across the field holding it out in front of them in their palms, but keep in mind they are trained to do so. If the man who found the mine tried this, it would be much more dangerous because he does not know what sets the mine off.